Skip to content
The Health Cast > Heart / Cardiovascular > AHA News: Fitness Didn’t Keep Him From Heart Problems or COVID-19, But It Did Help Him Recover

AHA News: Fitness Didn’t Keep Him From Heart Problems or COVID-19, But It Did Help Him Recover

By: TheHealthCast Team
In: Heart / Cardiovascular 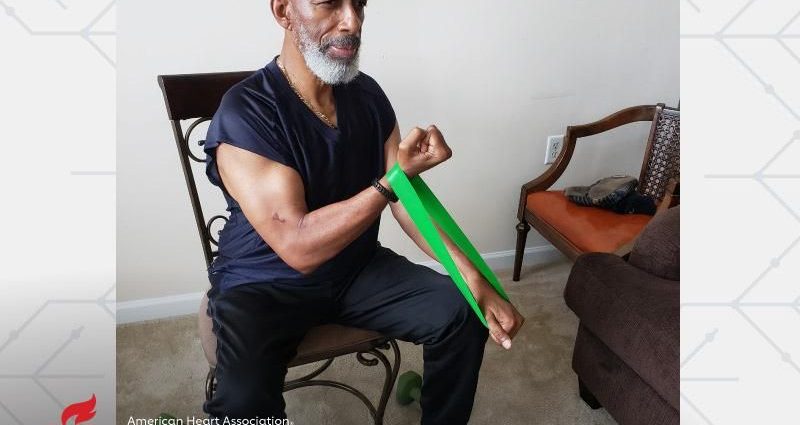 FRIDAY, Sept. 17, 2021 (American Heart Association News) — About a month into the COVID-19 pandemic, LeCount Holmes saw on television that Maryland Gov. Larry Hogan was within a mile of his house for a big announcement.

Because Prince George’s County was one of the areas hardest hit by the coronavirus, a former regional hospital was being reopened earlier than planned to provide treatment to another 135 patients.

Holmes hopped on his bike, hoping to catch a glimpse of the governor. By the time he arrived, only news trucks remained, but at least he’d gotten some exercise.

Although he was 70, Holmes’ attitude toward the virus was, “Being in such good shape, it’s not going to get me.”

Holmes was 4 when his father taught him how to ride a bicycle. He’s been active ever since.

Growing up in Washington, D.C., in the 1950s and ’60s, he loved swimming and hand dancing, a D.C.-bred form of swing dance fueled by Motown sounds. When he was 15, his gym coach had the boys do pushups. Tall, skinny and weak, Holmes was so embarrassed at not being able to do any that he vowed to do something about it.

“My grandmother got me weights,” he said. “My mother said I had to use them in the yard because they were too loud indoors.”

Within a year, he could lift 110 pounds with one arm.

Over the ensuing decades, Holmes lived a colorful life.

He considered becoming a Muslim; now he’s a practicing Buddhist. He’s done voiceover work in radio. For more than 25 years, he’s portrayed Frederick Douglass for high school and college audiences around the country.

He’s also been a motivational speaker and a fitness instructor. In 2004, at 55, he won bronze medals for swimming and track and field in the Atlanta Senior Olympics.

Two years ago, Holmes was teaching a water aerobics class through Prince George’s County Department of Recreation. One day, while standing on the side of the pool, he passed out.

Holmes was diagnosed with atrial fibrillation, an irregular heartbeat. For someone always fit and active, this brush with mortality frightened him.

“It was scary because I’ve gone to quite a few funerals for people I’ve grown up with,” he said.

But he trusted in his overall excellent health and in his lifelong affirmation: “The name of life’s game is don’t give up.”

The county invited him to keep them going via Zoom, but he declined. The technology intimidated him.

Last September, he learned to use Zoom and immediately resumed teaching.

In December, Holmes woke up with a fever. He was vomiting and his breathing was labored. He went to the emergency room at the hospital he’d biked to the day the governor announced it was reopening.

He tested positive for COVID-19 and was sent home to recuperate. Three days later, he felt even worse. A COVID contact tracer at the hospital called to check on him.

“She heard how sick I was and how I could barely breathe and called an ambulance,” he said.

Over the next two weeks, Holmes lost 15 pounds. He contracted pneumonia, his blood pressure skyrocketed, he needed oxygen and plasma, and he developed a painful aortic aneurysm.

Yet he persevered by focusing on not giving up. He practiced yoga and frequently chanted the Buddhist prayer “Nam‐myoho-renge‐kyo,” an expression of determination and prevailing over suffering.

“My old neighborhood, my friends in the Christian community, and my Buddhist community, they all prayed for me,” he said.

His doctor told him that if he had not been in such good health with such strong lungs, he might have not survived.

When Holmes left the hospital, he could no longer do a single pushup. By resuming his fitness regimen, he’s now cranking out as many as 80 a day.

In February, he launched his own twice-weekly online fitness class. He also has a monthly online motivational newsletter.

“My main motivation is to show seniors that life isn’t over, and that aging is just another chapter in your life,” he said.

He’s particularly interested in promoting fitness in the Black community, where obesity, diabetes and hypertension are more prevalent.

One of his regular participants is Lorraine “Bernie” Poindexter, a classmate throughout childhood who he became reacquainted with a few years ago when they ran into each other at an eyeglass store.

“My back was turned to him, but I recognized his voice immediately,” she said.

She wasn’t surprised to see that he’d stayed in shape and that he was leading fitness classes.

“He’s always been a very outgoing person, and his classes are really fun and energetic,” Poindexter said. “He teaches us new things all the time. He just had us order hula hoops.”

Holmes, who hopes to return to the stage this year, has a new goal – writing a book of poetry.

“I’ll keep reinventing myself until I lose breath,” he said. “Age is really just a number.”