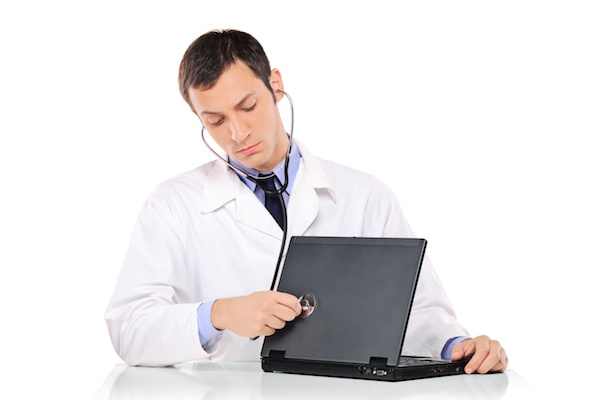 But Obama administration officials said Wednesday that the computer glitches were a reflection of heavy consumer interest in the exchanges, not flaws with the online registration system.

The exchanges — marketplaces created for uninsured consumers to search for more affordable health care coverage — are a cornerstone of what’s being called Obamacare, the sweeping and controversial health reform legislation.

The U.S. Department of Health and Human Services offered so-called survival tips for frustrated consumers after 4.7 million unique visitors logged onto the HealthCare.gov website on Tuesday, the day the exchanges were unveiled, the Associated Press reported.

HHS spokeswoman Joanne Peters urged people who find themselves on a “holding page” when they arrive at the website not to hit the refresh button on their computers or leave the page. Doing so will cost them their place in line, the AP reported.

“While this overwhelming interest is continuing to cause wait times, there will be continuing improvements in the coming hours and days,” she said.

Peters added that consumers have until Dec. 15 to sign up for insurance if they want coverage to start Jan. 1. The open enrollment period ends March 31, 2014.

The story was much the same Tuesday — launch day for the registration process — as health insurance exchanges from Florida to Hawaii got off to a rough start with many consumers encountering long delays and computer system snafus.

In 34 states where the federal government is running the exchanges, the troubles surfaced early on Tuesday. Consumers got error messages on their computers, were unable to review health plan options or couldn’t enroll online.

In Florida, many visitors to HealthCare.gov were unable to create accounts to shop for health plans and enroll, the Miami Herald reported.

Marilyn Tavenner, administrator of the Centers for Medicare and Medicaid Services, assured reporters during a late Tuesday afternoon press conference that the glitch had been fixed.

But reports of problems persisted throughout the day. And by 3 p.m. ET Wednesday, a visitor to HealthCare.gov looking to compare plans or enroll in coverage in Florida still encountered this message: “We have a lot of visitors on the site right now. Please stay on this page. We’re working to make the experience better, and we don’t want you to lose your place in line. We’ll send you to the login page as soon as we can. Thanks for your patience!”

The scope of the problems, however, suggested that the controversial law — which triggered an historic clash between Republicans and Democrats that produced the government shutdown on Tuesday — could be just what the doctor ordered for many Americans lacking insurance. The initial interest in exploring coverage options hinted at pent-up demand for the kind of coverage now being offered, the AP reported.

But states running their own exchanges also had problems on Tuesday. Among them:

Officials at the Centers for Medicare and Medicaid Services would not say how many people were able to enroll in an insurance plan through HealthCare.gov on Tuesday.

“This is day one of a process. We’re in a marathon, not a sprint, and we need your help,” Tavenner, the CMS administrator, said.

The rollout of the exchanges, or marketplaces, marks a key step in expanding access to health insurance for millions of uninsured Americans beginning in 2014. Under the law, most people without insurance face the prospect of a fine.

Once fully operational, the exchanges are intended to make it easier for people who are uninsured or have limited coverage to shop for health coverage. And consumers with low and modest incomes may qualify for federal tax credits and cost-sharing subsidies to reduce their monthly premiums and out-of-pocket costs.

“Now keep in mind that while this is the first day you can sign up, it is certainly not the last,” Tavenner reminded consumers on Tuesday.

Some 7 million people are expected to enroll in private health coverage through the exchanges in 2014, according to estimates by the nonpartisan Congressional Budget Office. Another 9 million will enroll in Medicaid and the Children’s Health Insurance Program, according to the research outfit’s projections.

Visit the official federal government website for details on coverage under the Affordable Care Act.