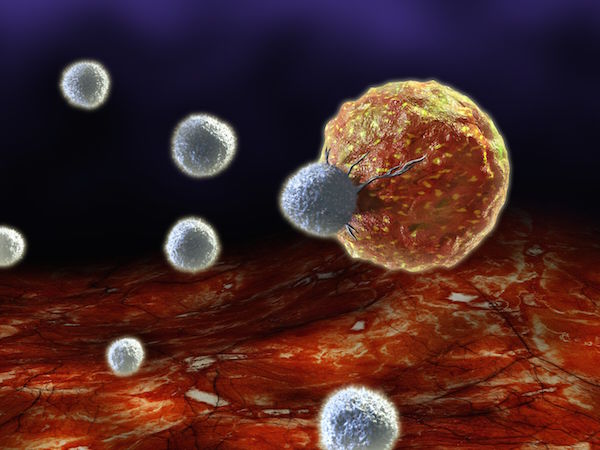 SUNDAY, June 6 (HealthDay News) — A new chemotherapy drug made from a sea sponge extended the lives of women with metastatic breast cancer by about 2.5 months, researchers report.

The promising finding on the drug, known as eribulin, was presented Sunday at the annual meeting of the American Society of Clinical Oncology in Chicago.

“We have a major need for new therapies,” noted study author Dr. Christopher Twelves. “We see a statistically significant benefit in overall survival in a situation where we rarely see this sort of improvement.”

“Eribulin targets the . . . mechanisms by which the cells divide, which is different from previous agents,” explained Twelves, who is a professor of clinical cancer pharmacology and oncology and head of the Clinical Cancer Research Groups at the Leeds Institute of Molecular Medicine and St. James’ Institute of Oncology in Leeds, U.K.

More than 750 women were randomized to receive either eribulin or a “treatment of physician’s choice,” the last because there isn’t a standard treatment for this type of cancer, Leeds explained. In almost all cases, it was another chemotherapy.

The study included women who had already been treated extensively for their cancer, with the average patient already having undergone four chemotherapies.

The researchers reported a 23 percent improvement in median survival when women took eribulin, with the median survival for those in the eribulin group at just over 13 months vs. 10.7 months in the treatment-of -choice group.

“These results potentially establish eribulin as a new and effective treatment for women with heavily pretreated breast cancer,” said Twelves, who disclosed financial ties with Eisai, which makes eribulin.

“Metastatic breast cancer is a disease where we have lots of different treatments, but none of them cure people,” said Dr. Angie DeMichele, an associate professor of hematology/oncology and epidemiology at the University of Pennsylvania Abramson Cancer Center in Philadelphia. “Women tend to take treatment after treatment after treatment and they’ll all work for some period of time then stop working, then they’ll move on to the next therapy.”

“This is very promising because this is a drug that works when other treatments have failed,” she said. “If it works well for patients who have already tried three or four other treatments, then it’s exciting to think it may have a lot of activity in women who are newly metastatic or in an adjuvant setting. It’s pretty rare to see a drug prolong overall survival in that setting.”

But one expert offered a word of caution.

Though interesting, the study results may be biased, added Dr. Massimo Cristofanilli, chairman of medical oncology at Fox Chase Cancer Center in Philadelphia, because the control group consisted of “physicians’ choice,” rather than one specific treatment.

Also, not all of the women in the trial may have had access to new drugs that have been coming out over the past couple of years, he noted.

In another study featured at the meeting Sunday, Italian researchers reported that liver biopsies can reveal whether a breast cancer that has spread through the body has changed its cellular characteristics, such as estrogen-receptor status, progesterone-receptor status or HER2 status.

These tumor properties often dictate the type of treatment a woman receives, meaning that some women may benefit from switching therapy if the characteristics of their cancer change.

In this study, 31 of 255 patients (12 percent) saw their tumor status change – based on the liver biopsy results — and thus changed treatments.

“We believe that when it’s safe and easy to perform, a biopsy of the metastatic lesions should be considered in all patients, particularly when there has been a long interval from first diagnosis,” said study co-author Dr. Giuseppe Curigliano, senior deputy director in the division of medical oncology at the European Institute of Oncology in Milan. “The biology of the cancer may change, and that is likely to impact treatment choice.”

The practice may become more common in the future, experts noted.

“As a whole new generation of targeted therapies come out over the next generation, it’s that much more necessary to obtain tissue,” said Dr. Eric P. Winer, a professor of medicine at Harvard Medical School, who moderated the news conference at which the findings were released. “Not performing a biopsy should be an exception.”

A third trial presented Sunday showed that removing more than just the sentinel lymph node, the first lymph node that breast cancer spreads to, may be unnecessary.

“If you look at survival, it didn’t appear to make a difference whether women had their lymph nodes with cancer removed or not, and survival was quite good in both arms of the study,” said study author Dr. Armando E. Giuliano, director of the John Wayne Cancer Institute Breast Center in Santa Monica, Calif.

The study, however, only managed to enroll 800 patients out of 1,900 originally intended, although Giuliano felt that it was “unlikely that removal of these lymph nodes would impact survival.”

“I think we should use this information selectively. Certainly, axillary [underarm lymph node] dissection for patients with micrometastases seems unwarranted,” he said. “The evidence is overwhelming that this operation may not be necessary.”

Right now, removal of these other cancer-containing lymph nodes is common.

The U.S National Cancer Institute has more on breast cancer.